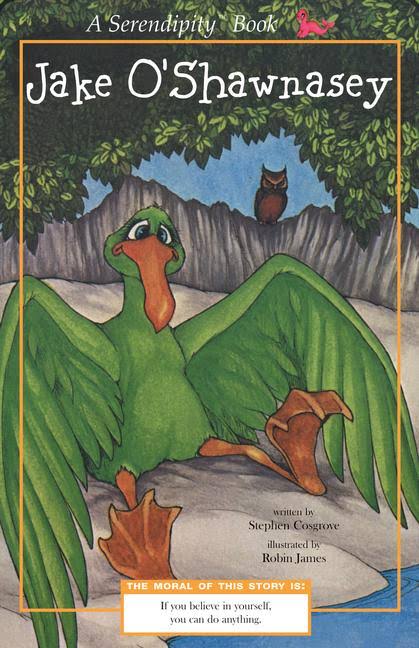 This is an intensely silly little book. Of course, that is what it is meant to be. For each page, there is an illustration of our hero, Jake - a green, Irish seagull with a potbelly who doesn’t believe he can fly. And so he can’t.

Eventually, the other birds conspire to help him out. The owl tells him to go to the top of the cliffs. And so, he does - using a rope, like a climber. There, he finds a carved rock: “If you find you’re not believing in everything that you do… Just remember that lots of trying will bring confidence to you.” This is, of course, carved in all capitals. Jake, reading this, realizes that he only needs to believe he can fly in order to be able to fly. And soon, he is flying. Go Jake.

Don’t worry, they spell out the moral:

So if you’re deep in trouble
and don’t believe in what you do…
Just remember Jake O’Shawnasey
and confidence will come to you.

The book ends on a final silly note - Jake never learned how to land. There’s a picture of him stuck in a tree with a bewildered, guilty, puppy-dog look on his face.

And that’s it. The whole book is around twenty pages. It’s more of a chapbook, and Wikipedia tells me that Serendipity Press was set up by Cosgrove to publish it and other similar books for children with a moralistic ending, and that he served as “the author, publisher, shipping clerk, and janitor.”

It would be too easy to end the review here. “Yes, it’s a small book, so it only needs a small review,” I can hear my inner critic saying. But, there are a few things I could point out.

First, all of the drawings of Jake make it clear that the illustrator, Robin James, had never been near a seagull. For one, the beak has a bulbous, hooked look, reminiscent of the dodo. The legs have a much longer tarsometatarsus and tibiotarsus than normal, which makes it look rather stork-like in some shots. They are webbed, but this doesn’t stop Jake from tying starfish to his digits, where they must have found some grip, just as his terminal primaries (nowhere near the terminal phalanx) did on the rope going up the cliffs. Jake also seems to have up to eight overlapping rows of feathers on the wing, making him an incredibly bulky bird - most seagulls appear to have only one or two sets. The eyelids blink downwards - in birds, this isn’t the case, as the nictitating membrane normally lubricate the eye from the side. They also appear to be pink, and, unfathomably, to have eye lashes. And, while we’re at it, let’s not forget that the feathers are green - perhaps a reference to the Irish country of origin (although Cosgrove is American).

Or I could mention that starfish don’t actually work as suction cups, as the adhesive is chemical, not hydraulic. Or I could question who carved those words into the stone, and how the seagull could read. Or ask why one of the fellow birds is a Bald Eagle, although there have been only two recorded vagrants to Ireland (one of which was shot by a hasty farmer in Fermanagh).

Or, stylistically, I could talk about the extra syllable in the final line of the moralistic quatrain. Or the run-on feel brought about by using an ellipses as a line ending. Or that “confidence to you” is quite awkward syntax, even in a poem.

But, while all of those things are fun to do, the real question is this: what absurd upbringing did I have to have to not appreciate a nice, little children’s book with a slight moral upswing about self confidence?

To this, I have no answer. Which means score one for Stephen Cosgrove. So, the next time I think I can’t do something, I’ll remember this book, and Jake O’Shawnasey. Which means that it was a nice read, in the end.