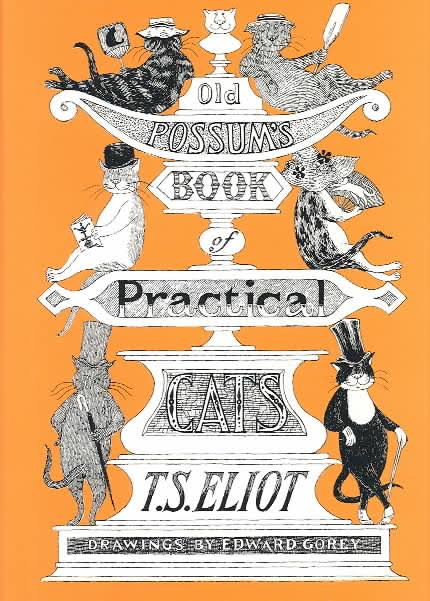 This was a thoroughly amusing and ridiculous book of poetry. TS Eliot manages to stuff more cat names and cat praises into octameter than an octopus puts feet on a scale. All of them are stupendously ridiculous.

Of names of this kind I can give you a quorum,
Such as Munkustrap, Quaxo, or Coricopat,
Such as Bombalurina, or else Jellylorum
Names that never belong to more than one cat.

Again, all of the poems are silly.

Let it be known that I am not a cat man, and I did not take kindly to the constant derisions of Pekes.

Of course I’m not including Pekes,
And such fantastic canine freaks.

Of course, the book’s saving grace is that it was written anonymously, and sent to old friends of TS Eliot, doubtless who enjoyed the reprieve from his overly sentimental and sometimes depressive normal verse. I used to send anonymous postcards from imaginary people in imaginary places, so I understand the creative urge, here. That makes this book OK.

A superb book for reading before bed, over tea, or on the toilet. Or, perhaps, all three. If you actually have a cat, this would probably be more fun, as you could try calling it Mungojerrie and see what happens.

These are words I didn’t know, or don’t use regularly enough to feel comfortable with.