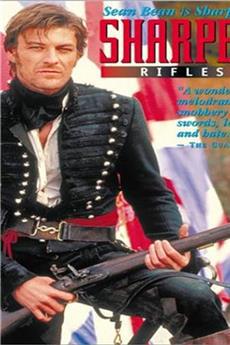 I picked up Sharpe’s Rifles in a small charity shop in the Outer Hebrides, last summer. I read it on a plane to somewhere; I think to Buenos Aires. Richard Sharpe is easily one of my favourite characters from any serial. Bernard Cornwell wrote a dozen odd books for this imaginary soldier from the Napoleonic war in Spain, where Wellington won his Lordship and where a lot of sad young men totally snuffed it. But for me, Sharpe is always Sean Bean, looking into the sunset at the end of every one of the episodes in the BBC miniseries where Bean first became really famous. Even in Lord of the Rings, Sean Bean says “Still sharp” when he cuts his finger on the shards of Narsil. That wasn’t an accident.

Rifles was the first of the books I’ve actually read, I believe. I may have read another a few years back, but I can’t recall at the moment what the title of that was. And certainly, at that time, I wasn’t taking the assiduous notes I do now. I have dozens of quotations in my files for this book, mostly of the mundane “this is what war is” variety. For instance:

The precious cargo had been strapped to a macho, a mule whose vocal cords had been slit so it could not bray to warn the enemy.

Fascinating! I have no idea if this was common, but it is a brilliant way to keep a mule from braying when needed. It’s also brutal, of course, but PETA wasn’t around in the 1800s. My favourite quotations are ones which explain both something meaningful about the past, but also serve to conjure up a beautiful image that helps me feel like I’m there. For instance, with smoking soldiers in file:

These men were now scattered throughout the column as guides, their services abetted by the cigars which Vivar had distributed amongst his small force. He was certain no Frenchmen would be this deep in the hills to smell the tobacco, and the small glowing lights acted as tiny beacons to keep the marching men closed up.

Or, less so, pigtails on the French:

The bloodied face was framed by pigtails.
“Cadenettes,” Vivar said abruptly. “That’s what they call those. What do you call them, braids?”
“Pigtails.”
“It’s their mark.” He sounded bitter. “Their mark of being special, an elite.”

The book itself was a fun, rip-roaring read. It strayed from the episode considerably, but I loved it; Sharpe and his small group of riflemen (sharpshooters) are tasked with a mission to help a Spanish nobleman kill his brother, a Francophile scientist who wants to bring the light of Napoleon to dreary, medieval Spain. Cornwell keeps the moralizing low, largely because the lower-class Sharpe won’t have any of it.

My favorite part of this book was unquestionably the end, with Sharpe manages to kill some important figure, and his immediate reaction is to pilfer the man’s boots.

And with the overalls came the most precious of all things to any infantryman: good boots. Tall boots of good leather that could march across a country, boots to resist rain, snow, and spirit-haunted streams, good boots that fitted Sharpe as if the cobbler had known his Rifleman would one day need such luxuries. Sharpe prised away the razor-edged spurs, tugged the boots up his calves, then stamped his heels in satisfaction. He buttoned his green jacket and strapped on his sword again. He smiled. An old flag, made new, flaunted a miracle of victory, a red pelisse lay in the mud, and Sharpe had found himself some boots and trousers.

That’s right. Victory is at hand, and all the old veteran Sharpe can think about is nice boots. Of course, this reminded me of Mat Cauthon in Robert Jordan’s Wheel of Time. I wonder if Brandon Sanderson had read Cornwell - it’s likely. A lot of fantasy authors admire him for his brilliant battle scenes. Sanderson has Mat say this, at one point in the books:

“So you’re using boots as a metaphor for the onus of responsibility and decision placed upon the aristocracy as they assume leadership of complex political and social positions.”
“Metaphor for…” Mat scowled. “Bloody ashes, woman. This isn’t a metaphor for anything! It’s just boots!”

Words I didn’t know or don’t use enough.