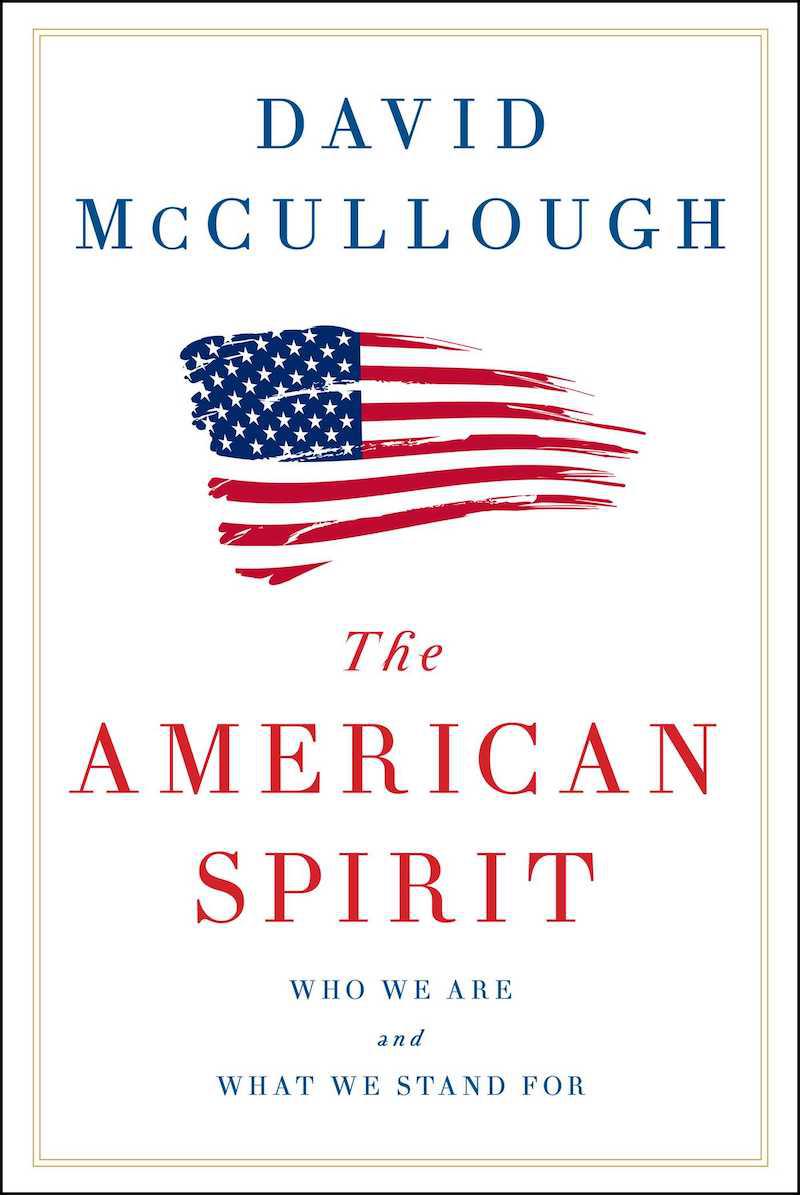 This book is subtitled: “Who we are and what we stand for.” As I was purchasing it at the Goodwill in Somerville, the cashier leaned across the counter and said “Do you think he’ll manage to say who we are, and what we stand for?” I responded: “I don’t know. McCullough is a famous biographer of great dead white men, so I wanted to see what he has to say. I doubt it, probably.” She looked at me blankly. In retrospect, I wish I hadn’t said the word ‘great’, or the word ‘white’. I sounded like an idiot. I wish I had just said “I’ll find out.”

Walking through Canadian customs carrying this book, and on the streets of Montreal and Toronto, I felt like I was carrying around a ticking bomb, and that the inevitably explosion would catapult me into the Republican party. Carrying a book with an American flag blazoned on it was an act, not of patriotism, but of anxiety. I wondered if people thought I was proud of my country, if I was a gun-toting Trump fan. As a liberal, it’s difficult to be proud at all of what’s going on at home: the wall, the concentration camps for new immigrants who came here to join in our dream, the revelations about Justice Kennedy, the memo about Trump leaving the WTO, the tariffs. Over and over again I’ve wondered what happened, and how we can raise the level of conversation.

I agree with that sentiment, and I highlighted my fair share of nice quotes and inspirational rousing calls to go and defend American values as put forth by the brilliant founders of the Constitution, and to improve them. This book was like watching an episode of West Wing, in that. Smart people: they’ll surely solve it all for us. They have before, they probably will again.

But the panegyric fell short, at times. There was barely any mention of Sally Hemmings, when McCullough mentioned Jefferson, for instance. (They finally opened a room for her this year at Monticello, using her shadow on the wall in lieu of a non-existent portrait). I felt there was little room for how the Unite States has failed as a country (by comparison, in Cornel West’s Race Matters, it’s right there in the first few pages). Reading this book after reading Between the World and Me by Coates, and some Baldwin, was a bizarre experience; I wondered how McCullough could be so full of pomp and pride for America, a country that has enslaved and destroyed so many of its people (and which continues to do so). Half of the speeches were given at old universities where he is describing the founders, who were old rich white men (as I and my mother like to call them, “dead guys”, although she uses that as her email address, somewhat embarrassingly). He can perhaps be forgiven for focusing on them in those occasions. After all, he’s one too, now (and I’ll be one, I hope).

Still, the words of the black cashier kept ringing in my ears the entire time I read this book: “Is he writing about who we are, and what we stand for?” I’m not entirely sure.

Of course, the hardest part of the read wasn’t the flat overtones of American exceptionalism. As with A Higher Loyalty, there was a buzzing fly going around my head the whole time I was reading this book - a fly with orange hair and a puckered proboscis. For example, this section was particularly hard to read:

“I pray heaven,” Adams wrote, “to bestow the best of blessings on this [White] house, and all that shall hereafter inhabit it. May none but honest and wise men ever rule under this roof.”

And, in defense of McCullough, his book was a clarion call for education and learning, and for remembering the great presidents and statesmen and women of the past, at a time when so much of my country’s media seems to be preoccupied with describing, in detail, the horror at the bottom of the barrel. (Perhaps the Lovecraftian Color in the Well was, in fact, orange; maybe Trump just stepped out of a the shimmer from VanderMeer’s Annihilation.) The book was good reading, for that alone. It is worth remembering that our country has gone through hard times, and that it is our generation’s job to keep the dream of inalienable rights and the pursuit of happiness available to as many as possible. As McCullough notes, Abigail Adam wrote to her son:

These are the times in which a genius would wish to live. It is not in the still calm of life, or the repose of a pacific station, that great characters are formed. The habits of a vigorous mind are formed in contending with difficulties. Great necessities call out great virtues. When a mind is raised, and animated by scenes that engage the heart, then those qualities which would otherwise lay dormant, wake into life and form the character of the hero and the statesman.

Well then, perhaps he did help me learn a bit more about who we are, as Americans, and about what we stand for.