The Restaurant at the End of the Universe 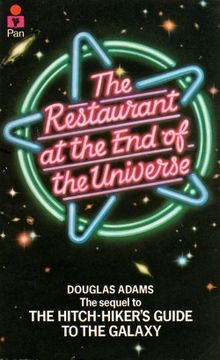 I hadn’t read The Restaurant at the End of the Universe in years. Yesterday morning I sat down and got into it. The second in the series, the first book, Hitchhikers Guide to the Galaxy, is a bit easier to read. I struggled through it, speed-reading until the very end. Some of the gags were repeats from the first book. For instance:

It is worth repeating at this point the theories that Ford had come up with, on his first encounter with human beings, to account for their peculiar habit of continually stating and restating the very very obvious, as in “It’s a nice day,” or “You’re very tall,” or “So this is it, we’re going to die.”

His first theory was that if human beings didn’t keep exercising their lips, their mouths probably shriveled up.

After a few months of observation he had come up with a second theory, which was this–“If human beings don’t keep exercising their lips, their brains start working.

Which I didn’t mind. This bit, in particular, made me chuckle:

It is a curious fact, and one to which no one knows quite how much importance to attach, that something like 85% of all known worlds in the Galaxy, be they primitive or highly advanced, have invented a drink called jynnan tonnyx, or gee-N’N-T’N-ix, or jinond-o-nicks, or any one of a thousand or more variations on the same phonetic theme. The drinks themselves are not the same, and vary between the Sivolvian ‘chinanto/mnigs’ which is ordinary water served at slightly above room temperature, and the Gagrakackan ‘tzjin-anthony-ks’ which kill cows at a hundred paces; and in fact the one common factor between all of them, beyond the fact that the names sound the same, is that they were all invented and named before the worlds concerned made contact with any other worlds.