The Revenge of the Baby-Sat 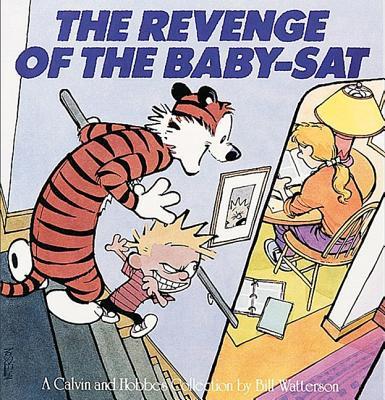 Calvin and Hobbes gets funnier as I get older. I’ve read this book an uncountable number of times, and yet I still find nuances I hadn’t gotten before, jokes I didn’t spot, and old retorts I can appreciate once again.

I totally lost it while reading at least one script on this read-through. When Calvin and Susie are playing house, and Susie pretends to bring home a baby, using Mr. Bun, to which Calvin furiously responds he didn’t want a baby, his posture and naked confusion are utterly identifiable and hilarious. Watterson was a genius not only of his own style, but also other styles of art; his realism here is startling, in comparison to some of his other strips.

A couple of strips betrayed something new to me on this reread: Watterson’s own dialect. While obviously American, it is also mildly regional and noticeably Midwestern. Calvin’s mom uses ‘soda pop’, instead of ‘soda’, as I would call it (being from the Northeast). As well, Calvin’s dad uses ‘what all’, as in, “Have you figured out what all is missing?” I would never use ‘all’ there. Another one would be “I’m going to the office and get some sleep,” which may have simply been a typographic error.

Also, Watterson tends to write from the parent’s perspective a bit more frequently here. I wonder if he was actually robbed - those strips don’t seem to me to be about Calvin very much at all, and they’re a bit deeper. I like that. It’s more about the family, and less about just Calvin.

It is naturally difficult to review periodicals in a codex as its own unit. Perhaps it is enough to say that Revenge is one of the newer books, in that it was made when Calvin and Hobbes were already well established. The themes they discuss are deeper than in other ones (as in, say, the eponymous Calvin and Hobbes book, or Something Under The Bed is Drooling). This book is, therefore, a treat.