Treehouses of the World 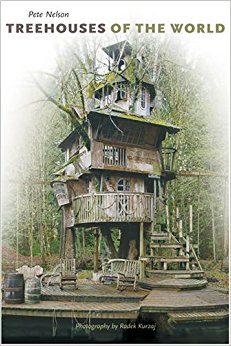 This was a fairly inoffensive coffee table book. It sells itself as a gallery of pictures of tree-houses around the world, with two or three pages per treehouse. From this stand point, it does an alright job - for instance, there are technically tree houses in Germany, Poland, Japan, and North America. There’s a couple of pictures of tree houses in New Guinea, too, from a National Geographic photographer who agreed to have the photos put in this book.

However, the book is a major disappointment in many other respects. It reads like an advertisement tract for Peter Nelson’s business, which sets up bland looking cabins, low to the ground for the most part (say, only 6-9 feet off of the ground) in the Pacific Northwest. Almost every story has some anecdote from the author about how they were given this job, or that job, what this client wanted, and how they were able to give them that. The first few dozen treehouses were almost exclusively made by the author and his company, and the amount of privilege required to contract a company to make a bespoke treehouse was either ignored or flaunted (“X client flew us there in a private jet! Wow!”, etc.). I was despairing by the middle of the book that all I was reading was promotional material. This wasn’t helped by the repeated praise for the Garnier Limb, or GL, a type of load-bearing screw which can be inserted into a tree - which surely can only be one of many ways to attach wood to wood.

Towards the end, some other, interesting tree houses start popping up. Like some artistic treehouses in New York and near Seattle. Or some Japanese tree houses, where they don’t damage the tree by inserting screws - which Nelson thought was atrocious, as the clamps they use might have negative effects on the tree, and thus completely missing the point that they did this to not damage the kami of the tree. There were also some older tree houses mentioned, such as the church in a tree in Southern France, or the types of raised decks they make out of trees for some biergartens in Germany.

There were no tree houses that I recall, at all, from Africa. The one Australian treehouse was a hotel. And I didn’t see any treehouses built by kids, or ones which were completely unsafe but totally awesome. Where was the three planks with a roof 200ft up in a pine tree? Do those not count? Where was the adventure? I felt rather like the qualifications for inclusion were an interior decorator and a power supply.

I don’t think it is meant to be read in one sitting, or even from front to back. So, it suffered from that. In fact, I’m not even sure this book is supposed to be read. I think you’re supposed to flip through it casually, and if you’re really curious, call up the author to ask if they would be interested in building a treehouse on your spacious estate for your grandkids.

In all fairness, some of them were cool.